SCAM ALERTS: Report a phishing scam or learn about the latest phishing emails

ONLINE SERVICES: We are currently experiencing issues with all our online services at the moment. We are working to resolve the services as soon as possible. We apologise for any inconvenience caused.

ONLINE SERVICES: We currently have an issue with receiving some payments and are working to resolve this issue as quickly as possible. We apologise for any inconvenience.

EASTER WEEKEND – PLAN AHEAD: Heading away for the long weekend? Check our holiday journeys tool(external link)

These webpages provide information about Milford Road and the unique environment that Waka Kotahi NZ Transport Agency is working within to maintain this solitary road link to Milford Sound Piopiotahi.

View of the Gertrude Valley, Fiordland National Park, from Milford Road. This image is refreshed every minute. 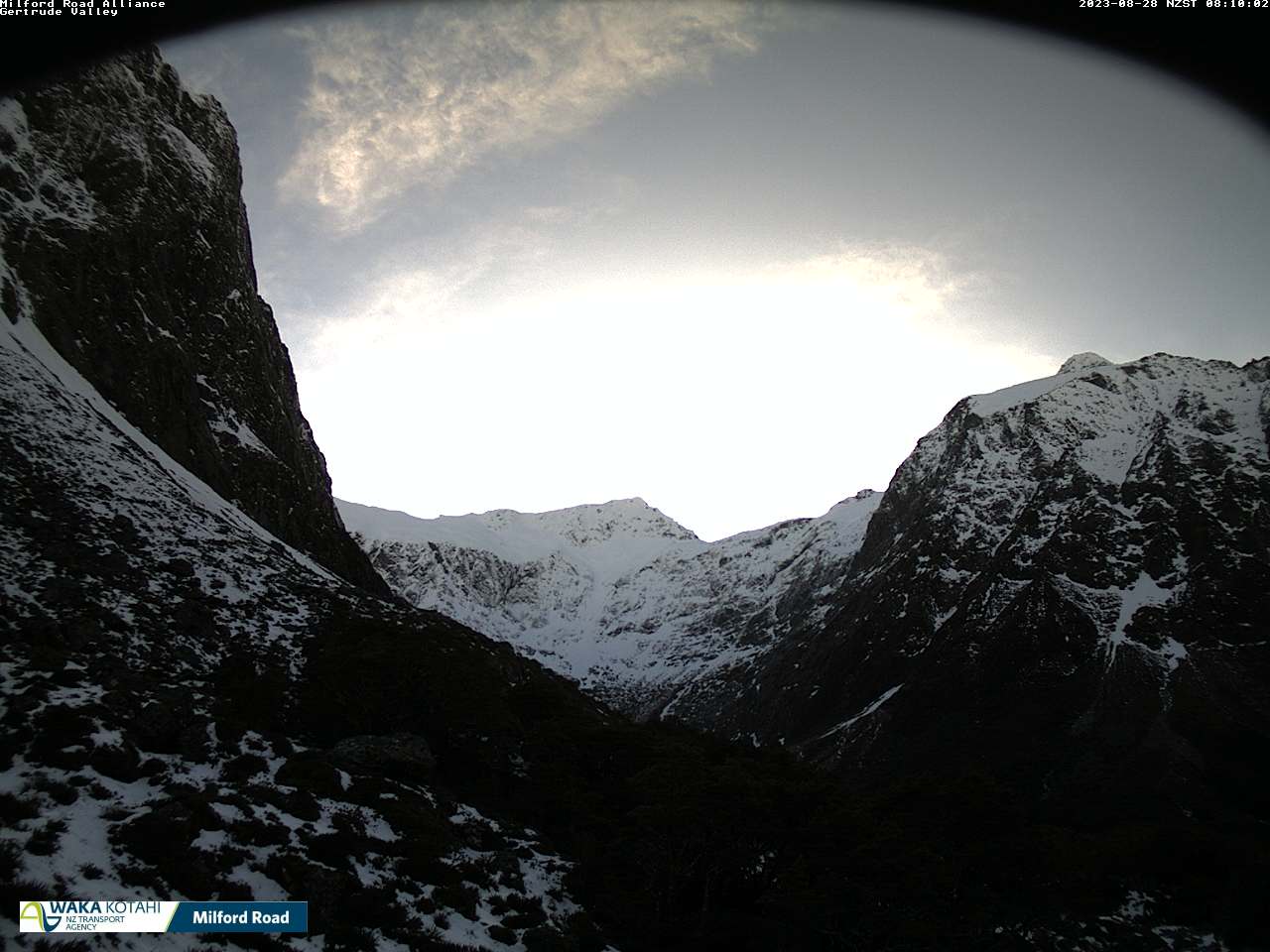 It’s been a long journey, but the end is in sight.

Much of the repair work associated with a damaging rainstorm just over two years that left a trail of destruction on SH94 from the Hollyford Valley turn-off to Milford Sound should, be completed over the next six months.

Several sections of large retaining wall were destroyed, and several new walls have been required along this section of highway after the intense rainstorm in February 2020 that dumped 900mm of rain in the area in just three days.

One of the biggest repair jobs was recently completed. This involved restoring severely flood damaged retaining walls carrying SH94 above the river near the Hollyford Road intersection area. The highway was returned several months ago to its pre-flood width through this steep narrow valley.

This has been a difficult repair job on multiple fronts and topping the list is the COVID-19 Pandemic and sourcing materials in a constrained supply chain environment. Among other challenges are possible rockfall risk, storm events, no cell phone coverage, limited road space, and most worksites being directly exposed to several large avalanche paths.

In addition to restoring Eastgate retaining wall, pictured below, repairs are being progressed on several bridges. All this work, subject to favourable weather and avalanche conditions should be completed by late winter or early spring.

A top priority for the Milford Road Alliance throughout this $9 million repair job has been minimising delays for visitors and businesses who depend on this road.

Why Milford Road is so important

The Milford Road provides the only road access to one of New Zealand's favourite tourist attractions – Milford Sound Piopiotahi. No other highway in New Zealand climbs as fast to the same altitude as this one which at its highest point is 940 metres above sea level.

For the latest road and weather details, here are handy tips for a safe trip and frequently asked questions about this road.

Driving to Milford Sound Piopiotahi from Te Anau or Queenstown

Those who built the Milford Road and the Homer Tunnel in the 1930s were, for the most part, victims of the Great Depression and directed to this work by the government of the day. For these men of the road, and their wives who followed them into this wilderness, life was incredibly harsh, but the road and tunnel had to go through.

The weather could be merciless, the terrain ferocious, steep and rugged and beset by floods and deadly avalanches. Some workers died; bridge structures, road works and tunnel portals demolished, by the irrepressible forces of nature that marauded this area. In 1952 the road was finally completed. However, it remained closed during winter until the late 1970s, when tourist and fishing interests successfully lobbied for the year-round operation of the road.

After a massive avalanche killed a road maintenance supervisor in 1983, a programme was developed to monitor, assess and control the avalanche risk on the Milford Road. This avalanche control programme enables the road to stay open as much as possible with optimum margins of safety for all road users.

The avalanche hazard is the prediction of the probability of avalanches happening and is expressed as a level of danger. You must consider this before driving into the avalanche area.

The Milford Road Alliance is a partnership between the NZ Transport Agency and Downer NZ to ensure the safe and efficient management of activities on State Highway 94 between Te Anau and Milford Sound. These include: avalanche control, incident response, managing the Homer Tunnel and general maintenance for the route.

The Alliance team is based in Te Anau. This ensures local ownership and decision making around the day-to-day operation of the highway, timely responses to issues and opportunities, and that the needs of customers using this key tourist route are met.

Meet the team responsible for maintaining the Milford Road

See the iconic Milford Road as you have never seen it before in this stunning 20 minute video.

Get some great insights into what it takes to manage New Zealand’s only alpine highway traversing some of our planets most stunning scenery. You will also meet the dedicated and skilled team who are responsible for this road and the many and varied challenges they face.

For the latest road condition information:

For Milford Road queries or concerns:

For other road related issues: